For just a moment I what to take you way back in time with this tomato bread recipe. Right after WW2 in the countryside of Romania, where life was tough, and peasants that lived on their farms in the fields were forced to move into villages. The government took away their lands and livestock and literally bulldozed the homes they built from the ground up with their own hands.

My grandfather was one of those peasants, and until the day he passed away he could not get over that violation against his family and the labour of his hands. Their diet consisted mostly of polenta and whatever he was able to occasionally hunt or fish. When he started over with my grandma and his lands were confiscated by the communist party, he took two things with him and kept them alive until today: a grapevine that still keeps shade over an old wooden table in the yard, and some tomato seeds that my 90-year-old grandma still plants year after year to this day in her little garden.

The most perfect heirloom tomatoes you could ever imagine tasting, that need absolutely nothing to compliment their flavor because they are simply perfection on earth. Baking bread was a weekly affair at the shack and most days on his way back from the garden, grandpa would pick the juiciest ripest tomato he could find and enjoy it in its most rustic form, only a peasant would think of. In this tomato bread recipe.

First he would char a thick piece of bread on the hot cast iron plate that seemed to always be hot, winter, summer it never made a difference.. There seems to have always been a fire burning at the shack. Once the bread was nicely charred and we could see the smoke rising towards the ceiling, he would strongly rub it with a garlic clove and brush it with oil. Then he would grab a sharp knife and slice right through the center of that tomato as to expose the meaty flesh and immediately rub it on his bruschetta until disintegrated into the most beautiful mess.

The crispy garlicky charred bread now soaked in those tomato juices is to this day the best thing I ever ate. And no 5 star restaurant has ever come close to that wholesome perfection, to tasting life itself, as in this tomato bread recipe !

So I hope next time you see a beautiful heirloom tomato at the market, you pick it up and treat yourself with this rustic tomato bread recipe. And taste perfection and life and eternity, all in one messy bite. 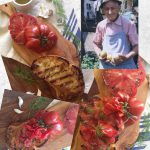