Jump to Recipe
These spinach artichoke grilled cheese panini are true Italian sandwiches. Crispy on the outside with creamy smoked mozzarella on the inside, hugging tightly with tender artichoke hearts and fresh baby spinach.

Who can resist right ? Definitely not me. Grilled cheese panini, pizza and bruschetta are my weakness, and if I eat them they better be pretty amazing.

For these spinach artichoke grilled cheese panini I started with a nice dense and crusty Italian bread, one that holds together nicely and also crisps up in the cast iron skillet.

To make them the ultimate grilled cheese panini you ever had, I used a garlic clove to rub over the crispy bread as soon as it comes out of the skillet. Much like making bruschetta, just a little touch of garlic gives it that “ je ne sais quoi “ that brings it all together, yet you can’t really put your finger on it.

The BatMan says it’s legit, so it must be true! Ha!

We already agree that spinach and artichokes make a fabulous pair, now cover them up in creamy layers of smoked mozzarella in between technically pieces of bruschetta, and you’ve got a keeper in your hands! I wouldn’t share if I were you 😉

Note worthy: I’ve also made these grilled cheese panini with sautéed spinach instead of fresh, and tough it really was delicious you are inevitably going to have more of a soggy sandwich if you go that route. Your call!

On a side note, I’m so sorry to those of you who weren’t able to access the blog the past couple of days. We had a glitch in our coding and the site was down, part of the growing pains. But we are back up and running now, and looking prettier too ? Hope you love it as much as I do.

To make up for that I send you these virtual spinach artichoke grilled cheese panini and a nice bottle of Vino to wash them down with! ~ Florentina Xo’s 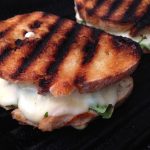 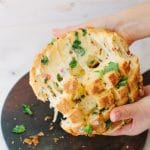 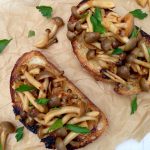 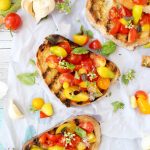